Mikhail A Botvinov, DO, MD

Gastric band surgery is a popular and effective way of losing weight if you’re severely obese. However, in some instances, the band can either fail to work as it should or cause unpleasant side effects. If your gastric band isn’t doing its job, Mikhail Botvinov, DO, MD, at Bergen Bariatric and Surgical Solutions P.C. can help. Dr. Botvinov is an expert in bariatric surgery, including carrying out gastric band removal and revision surgery. Call the office in Westwood, New Jersey, today to discuss your gastric band problems or book an appointment online.

What is a gastric band? 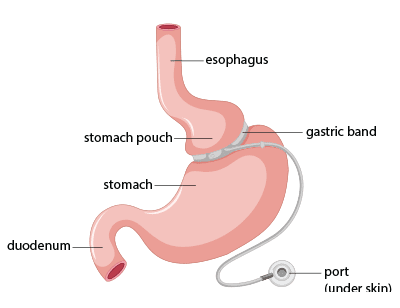 A gastric band is a device that Dr. Botvinov uses to reduce the capacity of your stomach. Gastric band surgery is a bariatric technique that can help people lose weight when they’re severely obese.

The gastric band goes around the top portion of your stomach, creating a pouch that can only take small quantities of food. As a result, you eat less and lose weight.

However, in certain circumstances, you might have to undergo gastric band removal. Dr. Botvinov is a specialist in bariatric surgery, including the removal of gastric bands. The risks are broadly similar to the original risks of having the band fitted, which are relatively low.

Why would I need gastric band removal?

Most patients who have a gastric band fitted go on to lose a significant amount of weight and don’t experience any problems with their band.

In some cases, patients find they still aren’t losing weight despite having a gastric band, in which case, removal might be necessary and an alternative approach to weight loss should be considered.

Failure to lose enough weight is the most common reason for gastric band removal. In a small minority of patients, the band needs to be taken out because it grows into the stomach, a condition called band erosion. The band can also become infected, requiring removal if antibiotics aren’t effective.

Some people find they can’t tolerate a gastric band, and experience nausea, vomiting, or chronic pain and discomfort. You might have problems swallowing (dysphagia), or develop a condition called esophageal dysmotility, in which your esophagus can’t get food down to your stomach properly.

Having a gastric band can trigger gastroesophageal reflux disease (GERD) in some people, causing indigestion and heartburn. This can improve with medication, but gastric band removal might be needed if your GERD persists.

Pouch dilation or band slippage can also occur. It might happen if the pouch above the band increases in size because some of the stomach below the band squeezes back through.

What happens during a gastric band removal?

Gastric band removal takes about an hour. Dr. Botvinov uses the same incisions used for the original surgery and can remove the band laparoscopically in many cases.

Once he’s made the incisions, Dr. Botvinov needs to cut the tissues that have grown around the gastric band. He takes out the sutures and any scar tissue, before cutting and removing the band.

Dr. Botvinov takes care to remove any trace of the original surgery, allowing your stomach to return to its previous shape. He might perform revision surgery, for example, a gastric sleeve procedure to replace the band, if appropriate.