Mikhail A Botvinov, DO, MD

No one likes the thought of removing an organ, but there are times when its presence is more of a liability than an asset, especially when it comes to painful gallstones in your gallbladder. For these times, turn to a qualified surgeon like Mikhail Botvinov, DO, MD, at Bergen Bariatric and Surgical Solutions P.C. He has extensive experience with this procedure using the most up-to-date surgical techniques available. If your gallbladder is causing problems, call the office in Westwood, New Jersey, or book an appointment online for a consultation.

What is the gallbladder?

Your gallbladder is a small organ, about four inches long, which is tucked underneath your liver. Its only mission is to store bile, which it releases into your small intestine through small ducts to help break down fat, allowing your bloodstream to absorb valuable nutrients.

Why would I need my gallbladder removed? 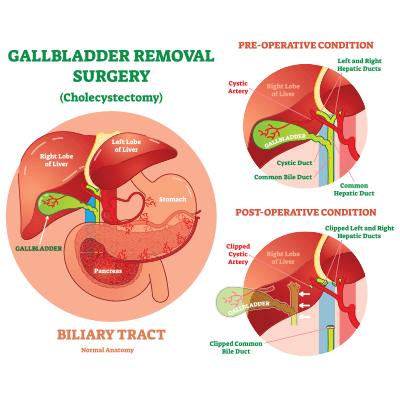 The primary reason behind gallbladder removal is gallstones, which are hardened deposits that form when your bile is out of balance. Gallstones can range in size from a seed up to a large grape, and more than one can develop, complicating matters further.

While they’re in your gallbladder, you may not be aware of their presence, but if they move and block the ducts that deliver bile, it can result in severe pain.

Gallstones don’t go away on their own, which is why 80% of people who have them opt to remove their gallbladders to relieve the pain. Gallstones can also lead to complications, such as:

While removing an organ may seem like a life-altering surgery, the fact is that you can function perfectly well without your gallbladder.

What is the procedure for gallbladder removal?

Wherever he can, Dr. Botvinov turns to laparoscopic surgery, and gallbladder surgery is one such instance. Instead of resorting to open surgery using a large incision, he removes your gallbladder using several tiny incisions.

In a procedure called a keyhole cholecystectomy, Dr. Botvinov inserts a tiny camera through one of the incisions to view the area, and then threads small, specialized tools through the other small incisions to remove your gallbladder.

You’re under general anesthesia during the surgery, so you won’t feel a thing and, when you wake, you’ll only have a few tiny cuts. Removing your gallbladder laparoscopically cuts down on the risk of infection and collateral tissue damage, and you’re able to recover more quickly.

If gallstones are having a major impact on your life, call the office to find out about laparoscopic gallbladder removal or use the online scheduling tool to book an appointment.